I got all excited when I saw Susanna Phillips was singing in Boston Lyric Opera’s A Midsummer Night’s Dream. I was this close to her backstage at the Met. We… you know…. hung out.

Except she was in the middle of singing La Bohème so we didn’t get to chat much.

And then I was talking to my new best friend at Modern Day Mozartian, and she asked me about cross-overs, which made me think of Renée Fleming and Matt Haimovitz. Matt doesn’t play opera, but I didn’t let that stop me from throwing him into the fray. I also wanted to get some Wynton Marsalis in and lo and behold I have him on a track with Kathleen Battle. Which absolutely counts. Here’s the playlist:

I was on a Tristan und Isolde kick because I just finished The Metropolis Case by Matthew Gallaway. There’s a lot of sex in it, so don’t read it if you’re my mother. There’s a lot of opera, too (and opera sex). AND there’s a lot about the Velvet Underground and My Bloody Valentine and Hüsker Dü and heaps of other bands I like.

Huge thanks to Sonic Trout for gluing it all together and sprinkling it with fairy dust and sequins. And hugest thanks to WOMR for airing it every month. You can listen live online at www.womr.org on the second Sunday of every month at the stroke of noon.

Wear your pajamas. I do.

When Nerone opens his mouth in Agrippina, you understand what happened to the Roman Empire.

Nerone is failing to launch. He lounges around in purple satin pajamas, annoying the staff and toying with lighting his mother on fire when word comes that his stepfather, Claudio, has died.

This is the beginning of Boston Lyric Opera’s Agrippina, by George Frideric Handel. From the audience’s perspective, Nerone is hardly throne fodder.

Agrippina (Caroline Worra) wants her petulant, spoiled, coke-addled son to be Emperor. As Nerone, David Trudgen minces, prances, swills (and snorts) elaborately. From the previews, I was afraid he was too grown up for the role. Was I ever wrong. He is every bit the annoying adolescent.

Agrippina enlists the help of Narciso (José Álvarez) and Pallante (David McFerrin) to help her get Nerone proclaimed Emperor. Just as she succeeds, word comes that Ottone (Anthony Roth Costanzo) saved Claudio (Christian Van Horn) and they are on their way home. To make matters worse, Claudio has named Ottone as his successor. This is not part of Agrippina’s game plan.

All three countertenors, David Trudgen, Anthony Roth Costanzo and José Álvarez, played their roles beautifully. You don’t hear countertenors every day, and yet I can’t imagine this opera without them. The vocal range is part of Handel’s wit. It’s just so…improbable.

While Nerone and Narciso are comic characters, Othone is the hero/victim. My friend whispered, “if Poppea doesn’t want Ottone, I’ll take him.” And who could blame her? Anthony Roth Costanzo, in his BLO debut, is the opera’s most likeable character with one of the sweetest voices.

Unfortunately for my friend, Poppea (Kathleen Kim) does want Ottone. She does not want Claudio and Nerone, who do want her. None of this is especially palatable to Agrippina, who uses Poppea as bait in her scheme.

As Poppea (and in general) Kathleen Kim is a woman to watch. “She’s delightful,” said the woman behind me. “What a show stealer.” I had to agree. I just saw her in New York as Chiang Ch’ing in the Met’s Nixon in China and couldn’t believe my luck at seeing her again in Boston. Kim pulled us out of our self-conscious chortles and made us laugh out loud with her character acting. The only thing better than watching her is listening to her.

Agrippina’s scheme does not work. Poppea’s does. Things get ever more complicated and convoluted as people chase and deceive one another. The antics escalate – people dive under beds and spring out of closets – until the scheming caves in on itself and we are left with a man who wants a throne and another man who wants a wife.

The costumes by Jess Goldstein are wonderful, gliding in and out of period. The characters do not play by the rules, and neither does the costuming – originally created for Glimmerglas Opera and New York City Opera.

Even the props are funny. Now that the Handel-spiked punch has worn off, I can’t say what tickled me about a painting gliding along the back of the stage on its own volition. It just did. The story snowballs until every gesture, every nuance, every out-of-context skull on a platter is inexplicably funny.

There are a few gorgeous arias that reel it back in, including Agrippina’s tender “Se vuoi pace” in Act 3. For all her antics, this is where Caroline Worra really shines.

It would be a tragedy if it weren’t hilarious. Even in its tragic moments, it winks and reminds us it is, at heart, a farce.

The tip-off is the relentlessly light-hearted Baroque orchestra. And what an orchestra. Gary Thor Wedow conducted the Boston Lyric Opera Orchestra and five-piece continuo group of period instruments. Harpsichord, theorbo, and virginals join recorder, strings, oboe, bassoon, trumpet and timpani. Where the set is simple and soaring, the orchestra is ornate and delicate. It fills in cracks and sweeps in and around the debauchery and deceit, unphased by the trickery on stage.

Throughout it all, a silent chorus provides commentary and atmosphere – peeking around walls and disappearing into shadows. Set designer John Conklin and Lighting Designer Robert Wierzel did a splendid job of keeping it simple overall, making the over-the-top elements really shine. Projected English titles were by Kelley Rourke.

A word about subtitles. The physical comedy in Agrippina makes subtitles hardly necessary. They are helpful to check in with, but not mission critical – until the end. Please, for the love of Caesar, read the subtitles at the end. Hilarious. 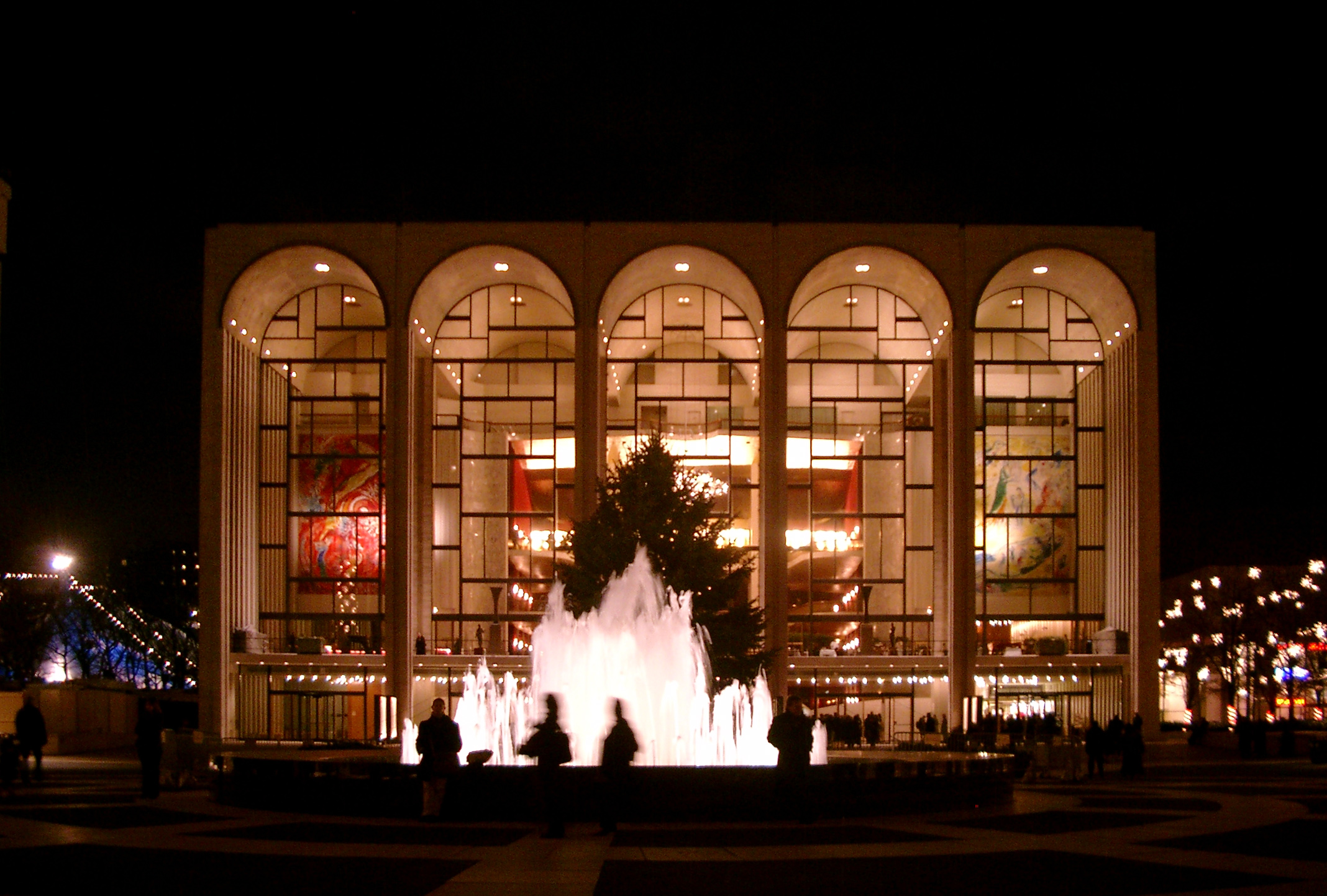 If I call it a company retreat on the internet, can I claim it as a tax deduction?

We went to New York for the week and saw as much opera at the Met as humanly possible without waiting for them to open Iphigenie.  They treated us incredibly well. And now we have to brag a little.

Nixon in China
First I should say that from here on out I’ll say “we” but I mean “I” because when something fabulous was offered I jumped at it and left the junior staffers in the dust. They had their moment – I just had more. Let’s try this again.

Nixon in China
On Saturday we saw Nixon in China which is good because we took our kids/staff out of school before school vacation so we could get to New York in time for Nixon. I really, really hope their teachers don’t read this.  Still it didn’t occur to me that John Adams (I love John Adams) would be conducting it. Of course John Adams was conducting it.

My editor (not here, this is not her fault) was stage managing the night we went. I had visions of her looking at the monitor and seeing my face appear above the wall that separates the orchestra from the general public. I like to think that she would not have expected to see me stage diving the pit.

It’s possible she expected that, which would explain the additional security.

La Bohème
I didn’t see La Bohème very well because I watched it from the wings (tra la!). I also missed parts of it entirely because I was running around making sure Mimi’s key was in the right place and stalling Musetta in the wings so she couldn’t get to Mimi in time with the medicine.

That last bit is not exactly true – although Musetta (Susanna Phillips) did stand right behind me and seemed very nice and like the sort of person who would sell her earrings to save your life if need be.

Marco Armiliato smiled at me quite by accident but I will remember it forever nonetheless.

At first intermission the junior staff members came backstage to watch the scene change and were each given a handful of Act III snow. Note: people who say opera is snobby have not met the people who work backstage. People in the house sometimes need to get over themselves, but the ones who make it all happen are the cat’s pajamas.

I got to pet the horse and the donkey and ate a cookie out of the Act II cookie jar. Don’t tell anyone.

My life mission is now to start as many sentences as possible with “this one time, backstage at the Met….”

Don Pasquale
The last time I saw Anna Netrebko in something it was Lucia di Lammermoor. Lucia is almost exactly like Don Pasquale in that she wants to marry someone and someone else is not letting her. The difference is that in Don Pasquale she smashes things and then redecorates and in Lucia she kills someone and then dies. I liked her in both.

You know what else I like? Sitting in box seats. The boxes have their own coatrooms. We sat in the parterre for Don Pasquale and I really think it made it sound better.

“I could get used to this,” I said to the Opera Betty CFO.

He also thought the plot was “far-fetched” which… oh please.

I learned some important things about opera while I was there – specifically, that you can order dessert ahead of time and be seated in the Met restaurant during intermission. We didn’t do this but only because we’re idiots.

I also learned that my daughter and I are not the only ones to get sucked into American Girl Place and spat out on 5th Avenue. I had a nice chat with the radio broadcast coordinator and she knows all about these things.

Opera people, after all, are people too. They just get to smash things.

In Episode 5 we threw Tosca off a roof, met some aliens and discovered an opera about irritable bowel syndrome (which we did not play. sorry.) Here’s what we did play:

Huge thanks to Richard deCosta for sending me tracks from K’ai. You can read more about the opera at kaiopera.richarddecosta.com.

For “Operishness in the News” I found an article in the Utne Reader titled “Which Metal Singers Have the Best Vocal Technique?”

Judas Priest was one of the writer’s picks, so I played some.

I also couldn’t resist the headline “British opera-singer/spy performed before Hitler with secrets in her underwear” in the Telegraph. Anytime there’s a headline with opera andunderwear, I’m on it. (not in it, mind you)

(don’t take that the wrong way)

The opera about IBS is “Intolerance” by Mark Ravenhill. Here’s a quote from the article:

The fruits of our collaboration, a half-hour operatic monologue called Intolerance, plays in London next week, as part of the Tête à Tête festival of fringe opera. We’ve put the whole thing together for £900. We’re still looking for an orchestra who will play for beer money, though….

Think of the eyestrain you’ll save yourself. And you already know to turn down when the Judas Priest song is coming up, something those poor live listeners wish they had known.

I don’t know how something can be brandy spandy new AND archived, but I am not the technical genius in this operation. The woodland elves at Sonic Trout are the technical geniuses. We are very grateful to them and their ability to cut out the bits when I completely forget what I’m talking about.

Opera Betty airs on WOMR (bless their hearts) on the second Sunday of every month. You can listen online at www.womr.org.