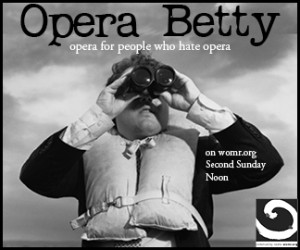 Opera Betty  began when the newspaper I wrote an opera column for went belly-up.The demise of the paper and my column are believed unconnected. Recently the demised paper’s managing editor was busted with $21k in drugs believed for distribution – but that’s nothing compared to what goes down in opera.

The column was geared toward people who read more Spin than Opera News – a fantastically underserved demographic, if you ask me. But no one did ask me, so I started the Opera Betty website. We accidentally sold the domain operabetty.com to Nigerian pirates in 2015, so now it’s all here under the Trout umbrella.