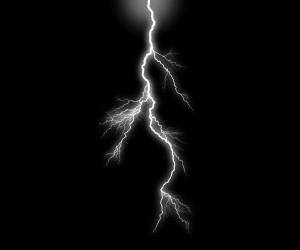 8am
Chris says the ground opened, which is what it feels like. Most of the lights don’t work and the house smells like melted appliances. The ground opened, and in we fell. I didn’t think this was supposed to happen until December.

Electricity is coming into the house at 220 because the ground wire went down in the latest storm onslaught. That’s not a good thing.

We’re not sure what survived, appliance-wise. When we open the refrigerator it looks like an alien spaceship is coming at us. (I mean the light, not the leftovers.) The kids are psyched because first everything was dark and then, just as they were done getting ready for school by flashlight, the house went into Demonic Possession mode. They’d flip a switch in one room, and a light would come on in another. It was awesome. I could barely get them out the door.

Meanwhile, back at the ranch, my mother-in-law has short term memory loss so we’ve been over what’s going on a million times in the last 15 minutes.

Note: There is something uniquely horrible about not knowing what’s going on and having to tell someone the specifics of what you don’t know and have no power over, repeatedly.

We started with the long story, and then moved to the abbreviated version:

“Is someone going to make me some toast?”

I think if we stabbed a piece of bread with a fork and then stuck the end of the fork in an outlet, it just might work.

NSTAR deemed it dangerous and advised us to throw the main breaker until they could send a crew.

(Long pause in which we wait and then give up, going to bed at 9 because what else are we supposed to do? There’s no internet and I am all caught up on my counted cross stitch by candlelight.)

10pm
I wake up to an authoritative knock on the door. A tall, handsome NSTAR man is in my garden. Behind him, my lawn is crawling with utility workers in foul weather gear.

You don’t realize how many windows you have until you are sitting in total darkness, with searchlights bouncing off every wall in your house from outside. It’s like a movie. Let me just say that I really hope the people who are inches from my windows, scaling my walls and shining searchlights all over my lawn in the dark of night are always using their power for good, not evil.

If the neighbors ask what all the search lights were for, I’m going to tell them Sugarplum lost her gerbil.