For Christmas we were given a hydroponic aquarium. It’s one of those things that you either love or send a thank you note that says “why would you do this to me?” People give us these things from time to time – things that make your kitchen explode or cover your bathroom in vegetable dye. We tend to love them.

The aquarium is designed to grow micro-greens on top while purifying water for the fish below. It comes with everything except water and a fish. Shortly after Christmas Chris took Sugarplum to the pet store in the big city where she picked out Antler.

Bettas are beautiful fish. I have had a few over the years and loved their grace and vivid splendor. They come in these crazy colors, as can be seen in a simple Google image search:

You can imagine my surprise when Antler came home and turned out to be a natural brunette like the rest of us. Out of all the fish, my daughter picked the beige one. That’s really nice, I thought. She brought home the one no one was going to buy.

We grew radish greens and wheat grass, most of which we ate or juiced before they turned to brown sludge. We replanted when the first seeds were spent and experimented with different greens with varying degrees of success (read: failure).

Things were going great. The fish was happy, the plants were happyish, and then the aquarium went from passable to an omg-where’s-the-fish? bucket of slime in less than 12 hours. The parallels between Antler and life in our house just never let up.

Antler does not eat just any fish food. Or maybe he does, but he’s doing great on what came with the Water Garden so I figured we should stay with what’s working. The thing is, the kind he eats come in two versions: regular and color enhancing.

I have puzzled over his color a few times since his arrival. For a little while I thought he might be a juvenile and hadn’t settled on a color yet. Like baby eyes. But could it be all Antler needs is color enhancing fish food?

I agonized over this decision longer than is sane. Antler is Antler. He is supposed to be brown. We love him and let’s face it, the chances of him attracting a mate in our dining room are slim.

Which is a shame, because he is seriously handsome. 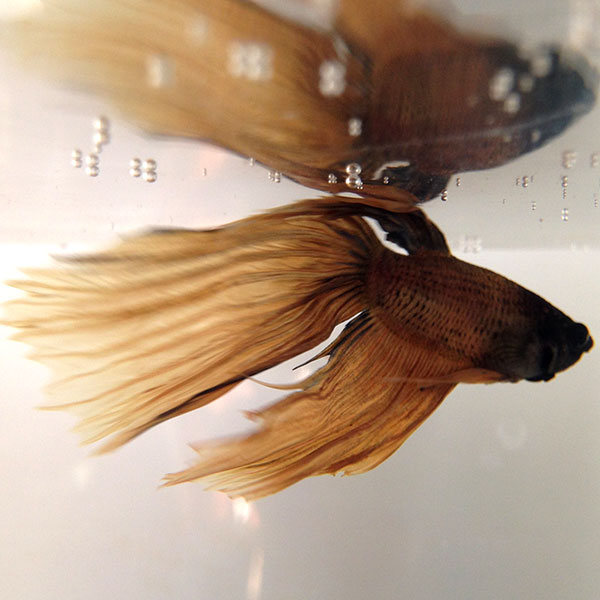 Eat your greens. Live your life. Be your own fish.