You know? things in this world are not going as planned. There are times when we here at Opera Betty read the news and shake our heads. That’s what we do when life imitates art. Life should make up some of its own material, if you ask me.

The Rake’s Progress was first performed on 9/11 (before 9/11 was 9/11), in 1951. The recording I have is of the world premier, in Venice (Italy, not Arkansas). It’s conducted by Stravinsky, so it’s completely rocking  – except it sounds like someone played the recording on a Victrola, while holding up one of those old cassette players. The cassette was then thrown out of a car window, driven over, respooled and digitally remastered.

In other words, it’s totally cool to have, but painful to listen to.

Stravinsky wrote The Rake’s Progress when he was already very successful, writing commissioned pieces for orchestras around the world. So full disclosure: no kick-backs up front. He was inspired by a series of modern moral subjects, by artist William Hogarth, and thought aw, what the heck? 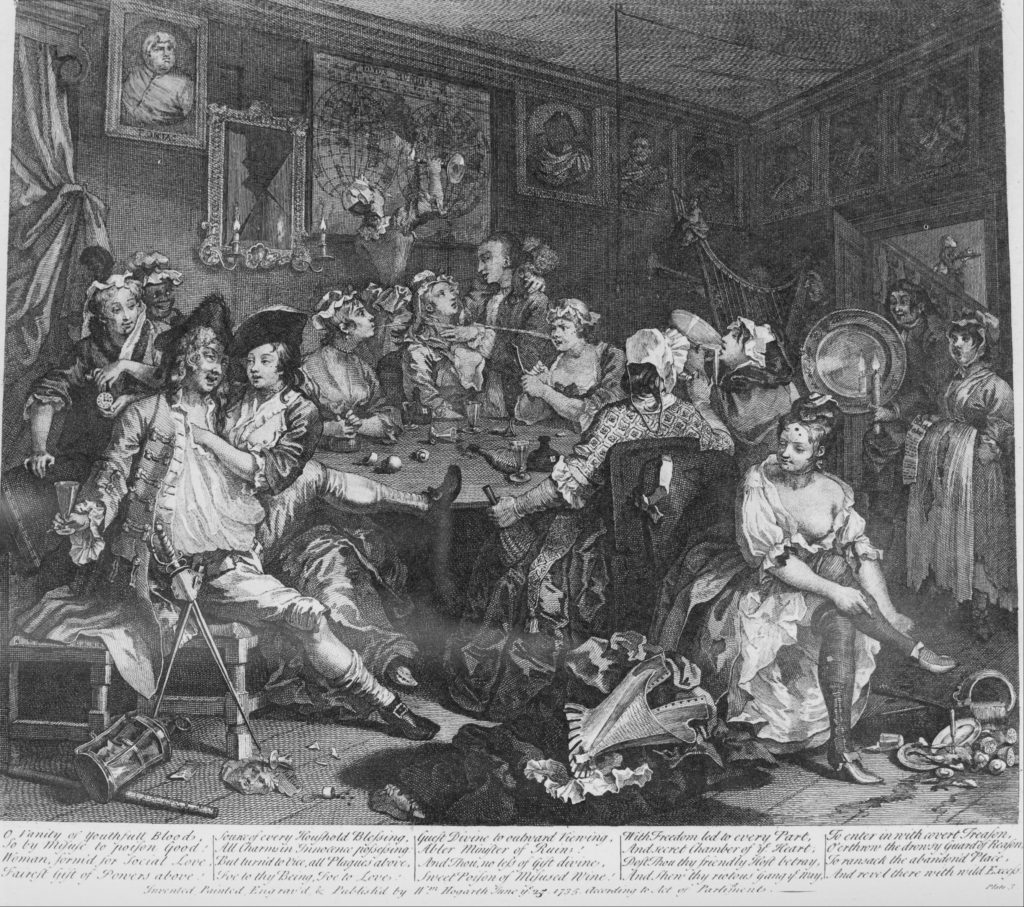 The Rake’s Progress, then, is a cautionary moral tale. Let us begin.

We have Anne Trulove and Tom Rakewell, singing in the garden of Anne’s father’s country estate. Her father has offered to help find Tom a job, but Tom would rather get rich without doing any actual work. He wishes this aloud and, poof! who should appear but Nick Shadow.

Nick tells Tom he has inherited a fortune. Tom hires Nick as a servant and the two go off to London to collect the inheritance. Note the “master” and “servant” irony, if you would, please.

In London, Nick takes Tom to a brothel, run by a madame named Mother Goose. I don’t make this stuff up, people. W.H. Auden and Chester Kallman did. To his credit, Tom resists the charms of the prostitutes, but finally succumbs to Mother Goose. I mean really, who can resist a little Mother Goose at bedtime?

Anne, sensing a disturbance in the force, goes to find him.

Meanwhile, Tom has grown bored with his stint as the prodigal son. He is rich, rich, rich, but still not happy. So he wishes he was happy and, poof again! Up pops Nick. Nick suggests Tom marry the bearded lady, Baba the Turk. Which I’m sure seemed like a good idea at the time?

Anne arrives, but is rejected by Tom. Which is a lucky break for her, I’d say.

Baba the Turk then drives Tom out of his ever-loving mind. He tosses a wig at her to get her to pipe down, which turns her into a statue. I’m sure there’s some kind of symbolism there but it’s beyond me.

With Baba quiet, Tom finally gets some sleep and dreams of a wonderful device. He wakes up and wishes it were true, because with this machine you could make bread out of stones. Get rich quick, scheme, anyone?

It’s even worse than that, because when Nick arrives on the scene to grant his wish, the machine is a fraud (you put in a rock and a loaf of bread comes out the trap door). Tom attempts to sell the machines (to eradicate world hunger, don’t you know), and goes bankrupt when he’s discovered as a humbug.

All of Tom’s belongings are then auctioned off, including Baba.

It’s been a year since Tom first met Nick Shadow, and it’s time for Nick to claim Tom’s soul (what’s left of it). They play a game of cards to see who gets to keep the soul and Tom, trusting Anne’s voice, wins with the Queen of Hearts. Ahhh! Peace and happiness at last!

Except Nick condemns Tom to insanity – which I hardly think is fair. He’s committed to an asylum (the notorious Bedlam asylum, interestingly enough), where he is completely delusional and tries to convince his fellow nut hatches that he’s the Greek god Adonis. According to godchecker.com, Adonis is  the “handsome God of Desire and Manly Good Looks. Has a very high squeee! factor.”

Let’s add godchecker.com to the list of random websites I have a new crush on, shall we?

The other inmates don’t believe him, until Anne appears and sings him a lullaby. They all think she’s Venus. And then Tom dies peacefully in his sleep. That’s some singing.

But wait! In case you missed the point, all the main characters come marching out for the Epilogue, and tell us their own version of what the hell happened. Pun intended.