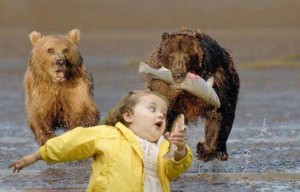 Someone recently posted one of those “ask your kids these adorable questions about you” things and of course I fell for it. Let me tell you, there are reasons people warn you not to take these quizzes. No, it did not steal my birthdate, blood type and mother’s maiden name. It did something far worse.

It all started a few months ago with the world’s best parenting trick. Seriously. I am a genius. You’re going to wish you had thought of it.

Last fall my son’s soccer coach suggested he get extra running in so he wouldn’t have to stop periodically and look for four leaf clovers. He gets that from me. I have never been a runner, despite frequent attempts. I am a wheezing, gasping, sweaty mess by the end of the driveway. I stop at the end of the driveway because no one in the actual outside world needs to see that.

First I had Studley run around the block, but the block’s not very far and he got bored. Driving alongside him worked until they kicked me off the bike path. And then I remembered Couch to 5k. With Couch to 5k you start with nice long walks speckled with short bits of running. I bought the app, laced up my sneakers and hit the road with my son.

I discovered these truths:

I also discovered that people see what they expect to see – and that people are kinder and more generous with their expectations than is reasonable.

What happened: I miraculously kept my whinging to myself with my son trotting alongside.
What people saw: A great and supportive mom, slowing it down for her kid.

I kid you not. People were practically throwing flowers.

I can’t tell you how great this was. Half my problem was how embarrassed I am to plod along in public. Suddenly my snail’s pace was making people’s hearts swell with gratitude for this obvious evidence of kindness and good parenting.

Admiration and approval is very motivational – even if the admiration is founded on a lie. You might think that I’d respond by becoming the mom people mistook me for, but something even better happened: I got to know my boy.

We were both out of breath most of the time – me starting with the tying of the shoes and him after the first spell of running – but I noticed that he was willing to talk while gasping for air, which distracted him from the stopwatch. So I asked him questions. Short, monosyllabic questions.

I learned what was going on in school, what he liked, what he was excited about, what projects he wanted to do, and all sorts of things I still have no idea about but are probably apps. On the trail we could talk about anything and everything.

I asked things like “what’s that?” “what’s it do?” and “tell me more” to keep him going. This will sound ludicrous, but I actually wanted my single-digit aged son to keep talking. I especially tried to get him on a roll when the app was about to say “Let’s Run!” so I could pretend to miss the cue.

He always heard it, and we ran.

We ran for six weeks and made a lot of progress, staying with the program despite the voice in my head telling me we were going to die. And then the weather changed and I had to beg out because who knew cold air burns the lungs like freaking acid?

After a couple weeks of waiting for the searing to stop, I decided I was off the hook and could give up running with a clear conscience. I had given it a good and valiant effort. Soccer season was over and so was I.

Months after we stopped, his answer to “What do you enjoy doing with me?” was still “running.” And not “running for the best spot on the couch to watch Mythbusters,” either.

For extra guilt-inducing credit, his answer to “what makes me happy” was “me.” Remind me of this when I’m gasping for air on the next non-sub-zero day, running at a pace slightly slower than a brisk walk.

I don’t know why he likes running with me. I am whiny, slow and probably unfashionable.
But I suppose it must be done. The entire town must be worried sick, wondering what happened to that darling little jogger boy and the best mom ever.

And he’s right – he is what makes me happy.

Maybe – somewhere under all the wheezing – I really am the mom people mistook me for.

If you have any tips on how you can run in cold weather and not cough up a lung, I’d appreciate them.